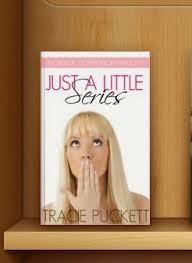 When I think about this series of short books as a whole, I have come to the conclusion that I really enjoyed them, there was a lot that I really loved about them….but I can’t help but feel maybe just little disappointed by the ending.

I guess I feel like Julie did through most of these books….I’m left wanting answers. But maybe that was what the author was going for, as Jules realized I’m this book, to stop trying to search for all the answers and rush to an end and instead simply cherish what you have, and enjoy the now. So I guess I have some conflicting emotions, while I can appreciate that sentiment and think it’s kind of cool, I also have all these burning questions that I wish I would have gotten answers to. What happened between Derek and Rebecca? Did she really just leave Zoey with him? What happened at school with Matt? Did Just a Little Soirée ever happen? How did Charlie fair in the end with everything? More than anything though I would have loved to see what everyone’s, most especially Luke and Julie’s, happy ever after looked like.

This book took place over a year after the previous one, and A LOT had changed in that time. Just a Little Sequel was chalk full of surprises. I was shocked by so many of them, but they definitely made for an interesting story. I loved all the progress made between Julie and Luke. But at the same time there was always one thing that I found a little odd and I thought left their romance to fall short….passion. I found it rather hard to believe that they existed in this place where after being in love for years they never did more than hug and kiss. I think they should take a hint from Salt-n-Pepa….

Or we can even class it up a little…

I guess I thought maybe the author was holding out for awhile because Julie was 17 at the starting of these books and some people are not fond of diving into that controversial underage sex subject. But she hit 18 a few books ago, and Luke was in his mid twenties, and as far as I know neither had any religious beliefs or anything that made them want to wait. And it never really talked about it, except for the bread thought Julie had about Rebecca having an unplanned pregnancy and that being enough to make her want to focus on the emotional part of her and Luke’s relationship for well over a year. I guess I just felt like all they’ve done this entire series was work on that, and I personally would have enjoyed a little more passion, or at the very least for it to be acknowledged that it had to have been something they thought about, and rather often I would think. That bit just felt unrealistic and rather immature to me. Not to beat a dead horse here but SERIOUSLY….

LOL! I’m not a sex crazed pervert, I swear!

All in all though I thought this was a really cute series, I was roped in after the first book! I loved that the first 4 were free through B&N, it was a great idea because after reading those first few free ones I was hooked, and immediately purchased the remaining 5 so I could devour the whole thing! And the books I did purchase were all reasonably priced, I don’t think I paid more than $1.99 for any of them. Well worth every penny a spent, this series was a delight to read from start to finish.

2 thoughts on “JUST A LITTLE SERIES BY: TRACIE PUCKETT”