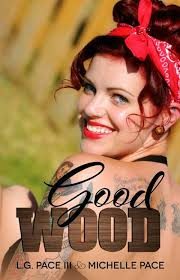 (image provided by Love Between the Sheets @ readlovelust.com)
I mean come on with a title like Good Wood….can you really go wrong?! This was a great contemporary romance. The first novel in what looks to be a very promising series! One of the things I enjoyed the most was how both of the main characters were dealing with a their own individual, and very serious, issues. Joe dealing with an unimaginable loss, and Molly just leaving a very rough marriage. They were both, in different ways, running away from things that went wrong in their lives and just so happened to run into each other.

(image provided by Love Between the Sheets @ readlovelust.com)

These characters were so rich, their stories grabbed me from the first page, and didn’t let go even after the end! Lets start with Molly, she was such a great leading lady! I absolutely loved her strength, and her back story was so much better for it! So many times when I read stories where abuse is involved, it seems like the victim is portrayed as this broken, fearful, timid kind of person, while that makes sense SOMETIMES, it’s not always the case. Even the strongest and best of us can get caught up in a situation like Molly’s. I was so glad that really came through in this story. She didn’t take a lot of crap from people and had a temper, which made for some hilarious outbursts, mostly involving her older brothers. She was also talented, ambitious, kind, funny and completely her own person. She was hands down my favorite character in this book, and that’s saying something because even the secondary characters were fantastic in Good Wood!

(image provided by Love Between the Sheets @ readlovelust.com)

Joe was almost as terrific as Molly….almost. His story was one of the saddest I have read in awhile. My heart instantly broke for his terrible loss. I have to say here too just how well done his dealing with his issues was done, well when he actually started trying to heal that is. I wasn’t a huge fan of his man whoring ways, I think that element could have been left out and he still had enough other issues to deal with that would have been more than enough to keep his story interesting. I feel like this is such a typical thing in contemporary romance/ NA now a days, that quite honestly I’m tired of. But that’s just my opinion on it. I really liked seeing Joe start living his life again, and I like that while Molly might have been a catalyst for this, SHE didn’t fix him. He worked on his issues, he wanted to be better for her, and for himself, and all his loved ones. I so appreciated that this wasn’t yet another co-dependent type relationship where he completely changed all his wicked ways for his one true love whom he just can’t live without. He wasn’t perfect, but either was she, and they weren’t all completely transformed into perfect people in the end. It just made me want more and more of their story! And the chemistry between these two….WOW!

Good Wood dealt with some serious issues, but still managed to be light and fun, and quite funny at times. This was the first book I’ve read by these authors, but I know it won’t be my last! I’ll definitely be here waiting for book 2 in the Carved Hearts series!

Anyone interested in purchasing this….the ebook is on sale right now for only 1.99 @
Amazon….http://amzn.to/1riZw6a     and
Barnes and Noble…http://bit.ly/UmCtKu