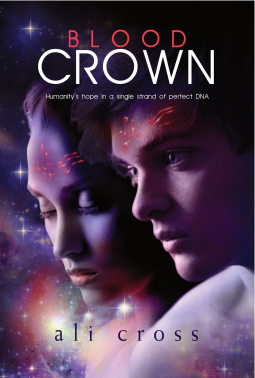 In this science fiction romance, androids have claimed power over what remains of the human race. They rule without remorse. They are the Mind and humans exist only to serve them.

But it wasn’t always so.

Before the android uprising, select droids, called Servants, were pivotal in engineering a new human race with nanotechnology enhanced DNA. The Blood Crown theorem was to be humanity’s crowning glory and the key to their survival in deep space.

But Serantha, Daughter of the West, was the last female to receive Gifts from her Servant and when the Mind mutinied, she was hidden away, and presumed dead.

Without Serantha there is no hope of the Blood Crown being realized so Nicolai, Son of the East, abandons his crown to join the rebel forces. He might not provide the future for his people he had once dreamed of, but he will not go down without a fight.

When Nicolai discovers Sera among a small compliment of kitchen staff, everything changes–but Sera’s Gifts were never completed and she is ill-equipped to face a legion of androids determined to wipe her, and every other human, out of existence.

Their only hope is the Blood Crown–but even if Serantha and Nicolai can realize their potential it may be too late to save mankind.

I’m going to make this a quick review… I apparently thought I had already written this review, as you can all see… I did not. OOPS!

Blood Crown was a pretty decent book (mind you I read this months ago, but I still remember what happened, and I still think it was good lol), it definitely reminded me of Terminator or IRobot or any other movie where robots take over and enslave mankind.

The huge difference is that there is no Earth now, at least not the planet Earth. Instead each spaceship is it’s own state floating among outer space and there is a King and Queen of the East and the West, when the droids revolt/have an uprising the King and Queen of West killed and their daughter presumed dead. But alas, she is not. Nor does she have any memories of her time before the uprising. Sera’s servant hid her away and she became part of the kitchen staff, only to be found years later by Nicolai who is fighting with the rebels, trying to destroy the robots before they overtake the East.

Granted there were some parts of Blood Crown that was predictable, and definitely some half robot teen angst, I mean what YA novel is complete without those things. But overall I did enjoy it. I don’t want to say that I was shocked at the end, I can say with certainty that I didn’t really think that droids could get that demented and warped but they did and they do.

Hopefully at some point I’ll check out book 2, when it comes out.

This ARC was provided by All Night Reads via NetGalley in exchange for an honest review, so so so sorry I am late with this review, thank you for your patience!

One thought on “Blood Crown by Ali Cross”