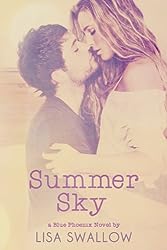 Sky changed her life for a man once, and she has no intention of doing it again – even if he is a six-foot, tattooed rock god who makes a mean bacon sandwich.

Sky Davis is fed up with boyfriend Grant taking her for granted, and when she comes home to find him wearing a girl, Sky suspects the relationship is over. She takes an unscheduled vacation and leaves the life (and guy) she hates behind.

Rock star Dylan Morgan is struggling with fame and infamy, sick of his life being controlled by other people. Dylan cuts his hair and walks away from his role as lead singer of Blue Phoenix, leaving behind chaos and speculation.

Outside the English seaside town of Broadbeach, their cars and worlds collide.

Sky decides Dylan is an arrogant guy with too many tattoos, and Dylan is amused by the smart-mouthed girl with no idea who he is. Dylan and Sky soon discover they’ve travelled to Broadbeach for the same reason – to escape from reality and head back to a place with happy childhood memories. Losing themselves in a world where they know nothing about each other, Sky and Dylan begin a holiday romance that soon heats up their rainy English summer.

Fantasies can’t last forever, and when reality crashes the party, Sky isn’t sure she wants to be more than his ‘summer Sky’ but Dylan doesn’t want to let her go.

Returning to the real world, public scrutiny isn’t their only problem. Blue Phoenix lead guitarist, Jem Jones, has a reason for wanting Sky out of Dylan’s life, and is determined to come between them. Some things won’t stay hidden, even when they’re paid to ‘go away’.

Summer Sky is a contemporary romance with a rock star flavour where occasionally more than the bacon sizzles. It is the first in the Blue Phoenix series.

Summer Sky left me confused with a bad case of whiplash! It was filled with a lot of… I like you, I don’t like you, you’re funny, you’re mean, I love you, I love you but I can’t be part of your world. I love you but I can’t accept you for who you are…
The main characters were just plain old selfish. Sky was in love with Dylan but didn’t want to be with him because he is famous, she couldn’t stand being with the man she loves because heaven forbid she get photographed or her privacy gets compromised. Dylan was just selfish in the way that he didn’t think before he acted. He didn’t care that Sky loves her privacy and the thought of it being violated concerned her. He wanted her no matter what, so showing up at her apartment at 3am, without concern that someone might catch him coming and going or putting her on blast on Twitter because she broke his heart by not wanting to be with him.
There was just so much drama surrounding these two that you half expect when you flip the page that there’s going to be another disaster awaiting them.

And there was, always something else. It got to the point where I would look at the book and be like “Really?!” To me, it wasn’t believable that so much could happen in such little time. By all means, I’m not an expert at dating a celebrity but it was excessive. In the real world, this relationship would never work. Every time they got up, karma kicks them in the teeth.

Overall, Summer Sky was meh… but it was free, so I’m not complaining too much over here. I did pick up the second one, just because I wanted to see if it could get any worse for those two. It did, lol.