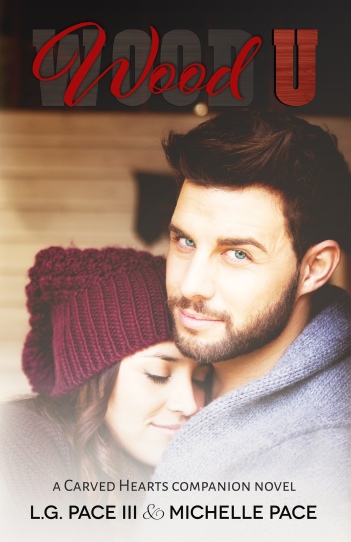 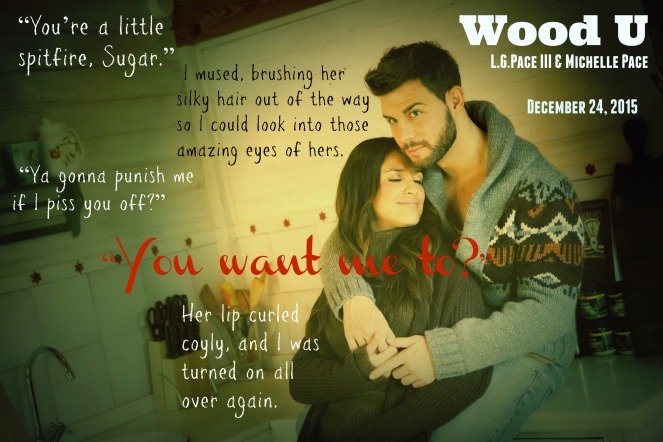 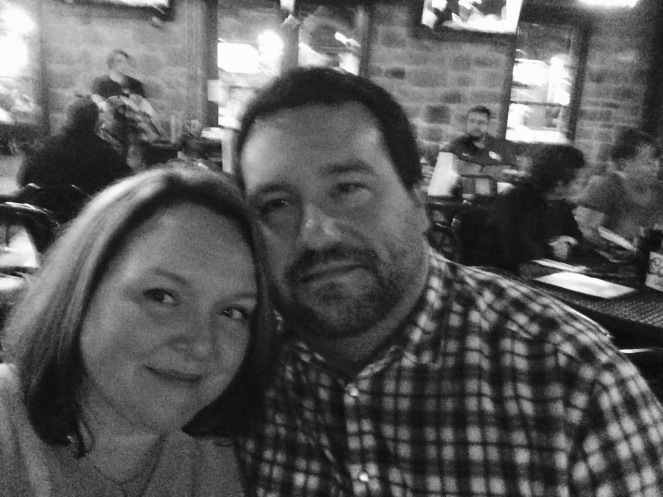 L.G. Pace III has spent several decades pouring creative energy into other things besides writing. He began his current journey by telling his two daughters bedtime stories about a magical realm and a hero named Terel. Though that story is still sitting unfinished in the electronic universe he has managed to bring several other stories out of the dark maelstrom of his mind for others to enjoy. He dwells in the great state of Texas with his wife, novelist Michelle Pace and their children.

OTHER WORKS BY L.G.PACE III:

CONNECT WITH L.G. PACE III AT:

Michelle Pace lives in north Texas with her husband, Les, who is also a novelist. A mother of three, this former singer and actress has always enjoyed entertaining people and is excited to continue to do so as a writer.

OTHER WORKS BY MICHELLE PACE:

Something’s Come Up (with Andrea Randall)

The Perpetual Quest for the Perfect Life (with Tammy Coons)

Connect with Michelle Pace at: 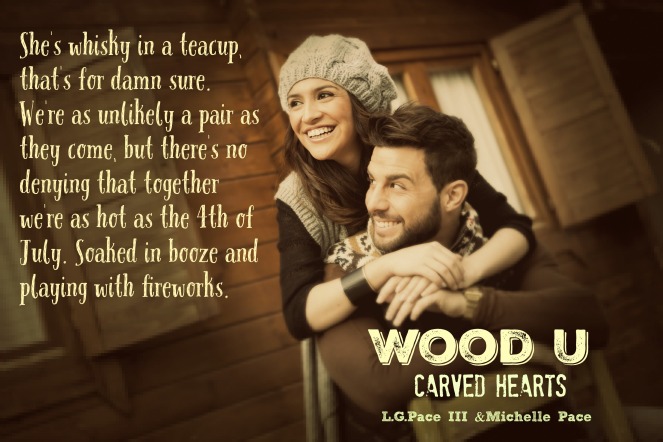 “Well now, small world.” Mac’s easy drawl sent shivers up my spine, and I sloshed some of the beer I was pouring. I turned to look up at him, and I’ll be damned if he wasn’t ten times more attractive than I remembered. “You missed me so much you couldn’t stay away?”

He flipped Todd’s empty chair around backwards and straddled it with a flourish. I decided he was a straddling expert, which made my mind wander to what else he might be an expert at.

“You found me out,” I joked, taking another long drink of my beer.

“Francis didn’t mention you were coming into town.” His pale eyes swept over me, and when they lingered on my cleavage, I found myself far less judgmental of him than I had been of Todd.

“He doesn’t know,” I replied. Mac’s eyebrow rose, and his lips slid into an infectious smile. I briefly wondered if his lips tasted as rich and delicious as they looked.

“I can keep a secret.” The way he said it made heat spread across my chest and up my throat. This man was always pushing, and I was surprised to realize that I liked it. I quickly explained about my new job and that I’d just been in town for a few days.

“Well, welcome to the neighborhood. If you ever need to borrow a cup of sugar, I’m your guy.” He held out his beer bottle, and I clinked my glass against it. He pinned me with his gaze as we both lifted our drinks to our lips. It was clear that Mac could make anything look sexual, even swallowing.

“Where’s your date?” I asked, clearing my throat. I glanced around for the trashy girl, but she was nowhere to be seen. When I turned back to him, his watchful blue gaze was still on me.

“Where’s yours?” he asked, laughter evident behind his eyes. His deep voice was a major turn on, and I caught myself twirling my hair.

“He’s around here somewhere,” I responded. Surprise overtook his features, and I realized he’d presumed I was alone.

“It’s a blind date,” I blurted and immediately felt like an idiot. His lips twitched with a ghost of a smile.

“He must be blind if he walked away and left you sittin’ here alone.” 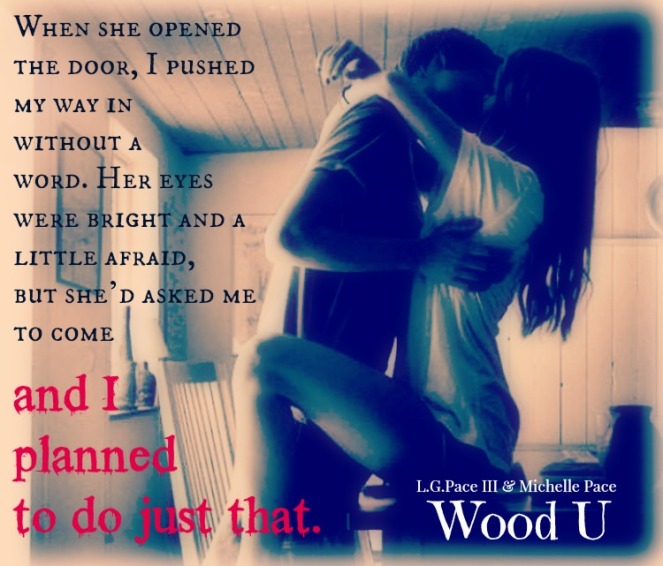 ****Wood U is the companion novel to the Carved Hearts series, if you haven’t had a chance to read the series yet, you can get all three books in one bundle right now for only 99 cents!!! **** 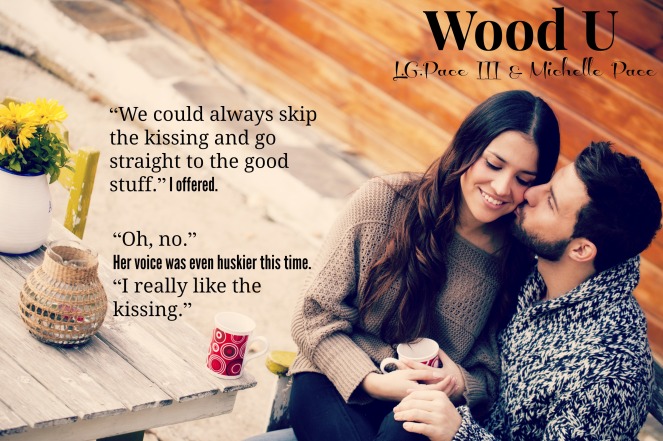 Our review of Wood U: 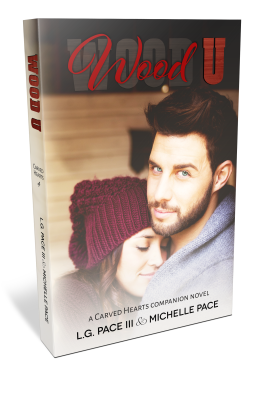 After seeing bits and pieces of Mac and Kelly’s relationship in the Carved Hearts series, I was so excited when I heard that Wood U was going to be telling their full story! And I am glad to say I was entertained from beginning to end.

Getting to better know both Mac and Kelly was great. I really couldn’t help but fall in love with Mac. I mean, I already knew I appreciated his smartass sense of humor from the other books. But I really loved getting to see another side to him in Wood U. The sweet, loving father just pulled on every single one of my heartstrings. It was devastating to see just how much he was going through with his Ex and his son. My heart broke for that little boy. I was especially interested in Kelly’s family relationships too. Her and her father, Francis, reconnecting was something I really liked seeing. Francis was someone I really loved from the other Carved Hearts books. So I loved seeing him be able to start a relationship with his daughter after so many years. And I will say that Kelly was just a super down to Earth character. Her mishaps and blunders really made her so much more likeable to me. I laughed out loud a few different times at some of the situations she got herself into.

I loved the alternating POVs. With the massive amounts of ongoing miscommunications between Mac and Kelly, seeing both their sides throughout everything made it really easy to understand just how important communication is in a relationship. It also made it pretty entertaining to watch them being so clueless and the mishaps that happened from such. Even though there were a few times towards the end where I wanted to physically shake the both of them for still not getting it! I also appreciated that this wasn’t just a repeat of the other Carved books, as much as I loved them, I was hoping for new stuff, and these Authors did this wonderfully! The time line started back with the other books, and while there were a few revisits to notable scenes, it was completely different this time around, and I couldn’t be happier with the way they accomplished this.

This was a book that you could read on it’s own, but the other Carved Hearts books were equally as awesome and I think you will appreciate this book that much more from reading them too.

I received an ARC of this book in exchange for an honest review.